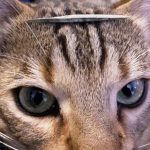 Chlorites are generally green and crystallize in the monoclinic symmetry system.  They all have a basal cleavage due to their stacked structure.  However Chlorites also form large individual tabular to platy crystals that are unlike most of the other clay minerals.

Interesting is the formation of a Phantom inclusion inside a Quartz crystal.  This happens when Chlorite coats a Quartz crystal the the Quartz crystal continues to grow.  Many times the interior “crystal” is indistinct or ghostly and thus the name phantom.  There is also a beautiful moss green formation which looks amazing under magnification.  Chlorite needles are interesting and tend to grow in a star cluster form, used for thousands of years as a tattoo needle.  For some reason the Quartz crystals tend to form more sharper points and slender bodies.

The local experts tell me that the Chlorite acts like an acid and eats away at the quartz whist forming.  This is why some Chlorite formations look eroded.

Color is usually green but can also be white, yellow, red, lavender and black.
Luster is vitreous, dull or pearly.
Transparency: Crystals are translucent transparent.
Crystal System is monoclinic; 2/m.
Crystal Habits: Rarely in large individual barrel or tabular crystals with an hexagonal outline. Usually found as alteration products of iron-magnesium minerals and as inclusions in other minerals. Aggregates can be scaly, compact, platy and as crusts.
Cleavage is perfect in one direction, basal; not seen in massive specimens.
Fracture is lamellar.
Hardness is 2 – 3
Specific Gravity is variable from 2.6 – 3.4.
Streak is pal green to gray or brown.
Other Characteristics: Cleavage flakes are flexible but not elastic.

Include garnets, biotite, quartz, magnetite, talc, serpentine, danburite, topaz and calcite, among many others.

Quartz is a fascinating common mineral, found in the Earth’s crust.  If pure, quartz forms colourless, transparent hard crystals with a glass like luster.  A significant component of many igneous, metamorphic and sedimentary rocks.  Found in an abundant variety of formations and colors.
Polished Quartz was the most advanced technology thousands of years ago, used by the Assyrians.  As a lens to focus light, could help start a fire for cooking.  The Vikings could have used one of these to find the sun on a cloudy day.  As a magnifying glass the ancients could see the stars too.  Today it leads technology being the main component of transistors which make our computers work and solar panels.

The presence of trace elements gives an abundance of color range and crystal forms.  Quartz is hard 7, light 2.65 and just adorable with an amazing shine when polished.  No cleavage, characteristic conchoidal fracture and strongly piezoelectric and pyroelectric.  Interestingly except in Twins where the opposites cancel each other out.

Luster is glassy to vitreous as crystals, while cryptocrystalline forms are usually waxy to dull but can be vitreous.

Transparency: Crystals are transparent to translucent, cryptocrystalline forms can be translucent or opaque.

Crystal Habits are again widely variable.  A prominent habit is hexagonal prisms, terminated with a six sided pyramid.  This is two rhombohedrons. Three of the six sides of the pyramid may dominate causing the pyramid to be or look three sided. Left and right handed crystals are possible and identifiable only if minor trigonal pyramidal faces are present. Druse forms (crystal lined rock with just the pyramids showing) are also common. Massive forms can be just about any type but common forms include botryoidal, globular, stalactitic, agate.

Cleavage is very weak in three directions (rhombohedral).
Fracture is conchoidal.
Hardness is 7, less in cryptocrystalline forms.
Specific Gravity is 2.65 or less if cryptocrystalline. (average)
Streak is white.
Other Characteristics: Striations on prism faces run perpendicular to C axis, piezoelectric (see tourmaline) and index of refraction is 1.55.

Notable Occurrences of amethyst are Brazil, Uraguay, Mexico, Russia, Thunder Bay area of Canada, and some locallities in the USA. For Smoky Quartz; Brazil, Colorado, Scotland, Swiss Alps among many others. Fine examples of Rock crystal come from Brazil, Arkansas, many localities in Africa. Fine Agates come from Brazil, Lake Superior, Montana, Mexico and Germany.

Best Field Indicators are first the fact that it is very common.  Then crystal habit, hardness, striations, good conchoidal fracture and lack of good cleavage.  Assume transparent clear crystals may be quartz.